A Goldendoodle is a cross between a Golden Retriever and a Poodle. The two breeds were chosen carefully to compliment one another. The Poodle was chosen for its curly, hypoallergenic coat and the Golden Retriever for its pleasant disposition and strong sense of loyalty. Both are highly intelligent breeds, ranking in the top 5 of the most intelligent dogs making Golden doodles among the most intelligent, and family friendly dogs.  Therefore you'll be getting much more than just a dog, but a companion for life.

estimated to be 5-10 lbs fully grown

estimated to be 5-10 lbs fully grown To pick up your puppy, you are welcome to fly in to the SLC airport and we will meet you at the airport; or we can recommend a couple puppy nannies that can deliver them to your nearest airport.

Golden doodle puppies come in all different colors and sizes, so here I'm gonna break down our estimated adult sizes for you.  Breeding a full-size Golden Retriever with a Standard Poodle is going to result in Standard size Goldendoodles.  We estimate they'll be between 50-120 lbs fully grown.

Check out our PUPPY CARE or our REVIEWS AND TESTIMONIALS pages.

Look us up on Facebook, Instagram, & Pinterest.  And Fill out a PUPPY APPLICATION so we can email you when we have puppies available for you to reserve!

In understanding Goldendoodle Generations, I find it easiest to look at the percentages of Golden Retriever and Poodle and do the math to figure out what generation the puppies will likely be.  Here is a list of the various golden doodle generations to help simplify the breakdown:

What is a Goldendoodle?

A Goldendoodle is a mixed breed designer dog.  The Golden Doodle breed comes from breeding a Golden Retriever with a Poodle.  Golden doodle puppies are a very popular designer breed because of the loving, gentle nature of the Golden Retriever; as well as the hypoallergenic benefits that come from the poodle.  We love our Golden doodle puppies for their family friendly, playful, and naturally happy nature. 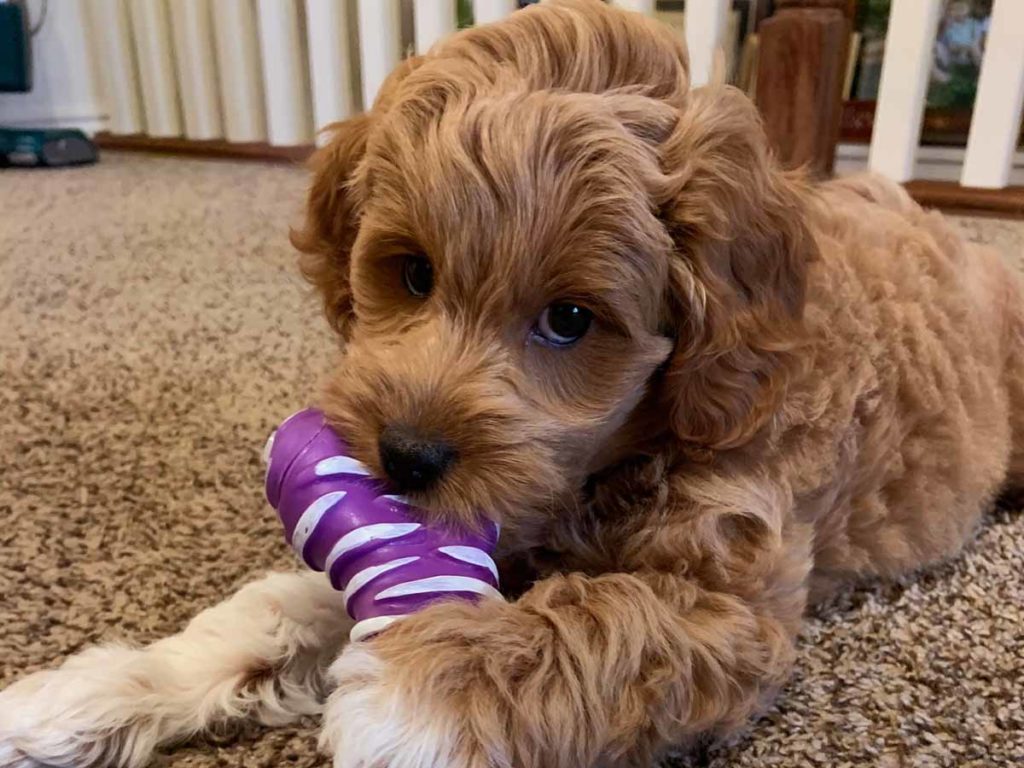 How big do Goldendoodles Get?

.The size of your Goldendoodle depends on the size of the parents, including whether they were bred with a Standard Poodle or a Toy Poodle.  A full-size Golden Retriever bred with a Standard Poodle is going to be somewhere between 50-100 lbs; while a Golden Retriever bred with a Toy Poodle could be as small as 15-40 lbs depending on each of the parents weights.  Our Teacup Goldendoodle puppies are estimated to range between 7 lbs & 15 lbs fully grown; while our Micro Golden doodle puppies are estimated to be under 10 lbs. Whether or not a Goldendoodle shed's is largely dependent on how much poodle they have.  There are some exceptions but generally speaking, when you have more poodle you have less shedding.  Because poodles do not shed anymore than you or I do, they bring that fantastic trait to the Golden doodle coat.  When they are only 50% poodle, most Goldendoodles will still have some light shedding.  As a general rule I try to encourage families looking for hypoallergenic dogs to look for a Goldendoodle that is at least 75% poodle which would be an F1B or F1BB Goldendoodle.

Teacup Goldendoodles and Mini Goldendoodles are gentle and affectionate dogs with an easy-going temperament. They are extremely intelligent, and according to the Goldendoodle Association of North America, they score in the top 4 of the 150 smartest dog breeds. They tend to get along with everyone and usually don’t bark at people they don’t recognize. The loving and social Golden doodle personality makes them great family pets, because they are great at getting along with kids and other pets.  They have an extremely social personality and love to be with their family.

Golden doodle puppies are a beautiful combination of the gentle & happy Golden Retriever as well as the hypoallergenic coat of the poodle.  Having a small, non-shedding, family friendly, playfully happy puppy is the ideal family dog.  Teacup Goldendoodle or Mini Goldendoodle are great for therapy dogs or companion dogs.  For families with children or not a lot of space, the Teacup Goldendoodle is ideal because of it's small size and incredibly friendly personality traits.

At Precious Doodle Dogs, all of our doodle puppies are raised in our homes with our families so that they're comfortable with being played with and being held and handled by children.  We test our breeding dogs for genetic diseases to ensure they have the best chances at a healthy happy life!  We strive for the best breeding practices so that every puppy, and every family is happy with their new doodle companion for years and years to come.

Be sure to check out our adorable Mini Goldendoodle and Teacup Goldendoodle Puppies for sale and let us know if you have any questions before reserving a puppy.  We want to make sure every puppy has a great home that's the right fit for both you and the pup.  If you have any allergy concerns or size concerns be sure to contact us before reserving a puppy!