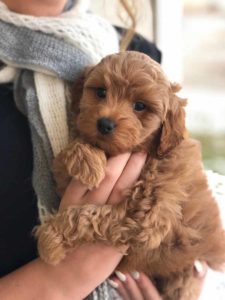 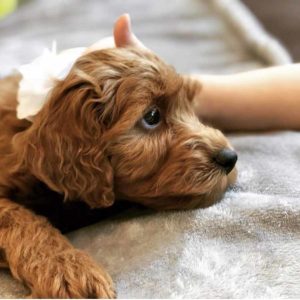 You're welcome to fly in and we'll meet you at the airport; or we can recommend a couple nannies to help deliver your puppy to you.

A Labradoodle is a cross between a Labrador Retriever and a Poodle. Each of the two breeds were chosen carefully to compliment one another. The Poodle was chosen for its curly, hypoallergenic coat and the Labrador Retriever for its pleasant disposition and strong sense of loyalty. Both are highly intelligent breeds, ranking in the top 5 of the most intelligent dogs.  The result was a smart and sociable dog who not only possessed a nature appropriate for guide dogs but also had a low-shedding coat. The Labradoodle is a wildly popular and very affectionate doodle dog. If you're looking for hypoallergenic dogs, labradoodles are a great option.  The more poodle the less likely there will be an issue with allergies.  Don't you just love these adorable doodle dogs?!

Labradoodles take on the best traits of both breeds. The cross between these two parent breeds make terrific family dogs, friendly, intelligent, affectionate and easy to train. They are devoted to their family and friendly towards children, other dogs and pets, and easy with strangers. They are social dogs, happiest when with people. Mini Labradoodle puppies are generally easy to train, since they are very intelligent and eager to please. For small labradoodles they usually do well with other dogs and pets in the household, and are generally good with children.

Teacup and Mini Labradoodles inherit the fur qualities of the Poodle in that most do not shed or shed very lightly and may not produce any allergic reaction. The fur texture is that of a Poodle as well. The curls are not as stiff though, and will tend to form a wavy or silky coat. From the labrador retriever it receives the pleasant temperament and strong loyalty that are associated with this breed.  Both Labs and Poodles are known for being among the smartest dogs.  Goldendoodles have a very similar temperament.  Check out our Teacup Goldendoodles & our Mini Golden doodle puppies while you're here.

Because they are a hybrid breed, the resulting hybrid vigor makes them less susceptible to genetic diseases associated with purebred breeds. They grow healthier and live longer than either parent line. The only genetic diseases they can be prone to would be those shared by both the Labrador Retriever and the Poodle. There are no major genetic health concerns, but a few minor concerns: cataract, SAS (heart disease), and CHD (Canine Hip Dysplasia), Von Willebrand's (blood disease), elbow and patella disorders.  We breed with clean lines and strive to provide only genetically healthy Teacup and Mini Labradoodle puppies.

Mini Labradoodle and Teacup Labradoodle puppies love to use their brains when they play. In fact, they thrive on training because it lets them learn new things and engages their brain. Being part retriever, mini & toy labradoodles have a natural instinct that makes them eager to serve and an athletic disposition that makes them fun to run around and play.

The shed-resistant coat our Mini Labradoodles have is great for keeping the house free of furry tufts, but it is also a magnet for dirt and bits from the yard.  Whether a Mini Labradoodle or a Teacup Labradoodle fur can be dense and curly, and can hold pieces of sticks, bugs and, especially, burrs. Their fur needs to be brushed regularly.

Here are the estimated sizes:

Check out our PUPPY CARE or our REVIEWS AND TESTIMONIALS pages.

Fill out a PUPPY APPLICATION and we'll email you when we have puppies available to place a deposit to reserve a puppy!